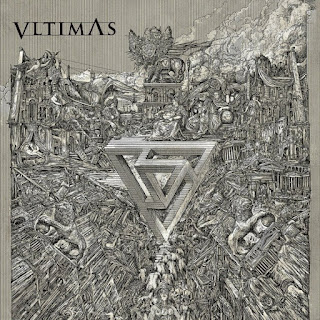 BIG BUSINESS – The Beast You Are
Heavy metal heretics are back to the two-piece format, and they sound fucking epic. (8)

DALEK – Respect To The Authors
Dense, suffocating hip hop/industrial hybrid on a tour-exclusive vinyl EP, from a group that’s much better than Death Grips if you ask me. (8)

DANIEL O’SULLIVAN – Folly
This is not “the heavier stuff”, to be precise it’s the exact opposite of heavy stuff, but since the guy also plays with Ulver and SunnO))) we thought we’d list him here. This is a fantastic and very English album that defies categorization but if you like Nick Drake AND Neil Young AND Soft Machine AND Current 93, you will love this. Check it out and then go out and discover Mothlite, the least known band O’Sullivan’s been involved with but arguably the best. (8)

DEVIN TOWNSEND – Empath
This is his 24th album I think, and it sounds like all 23 previous ones playing simultaneously. Surely the kitchen sink was left out by mistake? Totally bonkers, but in a good way. (7)

KULTUR SHOCK – D.R.E.A.M.
Gypsy punks return and blow the roof off the sucker. (8)

MANOWAR – The Final Battle I EP
Four tracks: A faux Hollywood instrumental, a sub-Judas Priest rip-off, a Celtic ballad counting on keyboards for the “epicness”, and one good song ruined by DeMaio’s decision to “sing” it himself. Time to go home boys. (5)

SUNN O))) – Life Metal
Majestic, hauntingly beautiful and FUCKING HEAVY. Not for the faint of heart though. (8)

SWANS – What Is This?
Weird acoustic tracks that seem to be a teaser/demo/foundation for the next proper album, which will apparently be recorded with a new line-up including Bill Rieflin (Ministry, King Crimson) and Anna Von Hausswolff. (7)

VLTIMAS – Something Wicked Marches In
Extreme metal supergroup featuring David Vincent (Morbid Angel), Blasphemer (Mayhem) and Flo Mounier (Cryptopsy), this is skull-crushing death metal at its best. Much better than anything either Morbid Angel or Mayhem have come up since 2000. (9)

AMON TOBIN – Fear In A Handful Of Dust
Electronica pioneer returns after a long hiatus with one of his strangest records to date – no sign of the twisted sampled breakbeats that characterized his most popular work, but with a captivating icy atmosphere. (7)

ANDERSON .PAAK – Ventura
Less rap, more soul-funk this time around. Not bad, but he’s no Smokey Robinson even though Smokey guests here. (7)

BHI BHIMAN – Peace Of Mind
Releasing the album as a podcast is an interesting experiment on music distribution, and the political sentiments expressed here are admirable. As for the music itself, I’ve previously called this guy “the Sri Lankan Ben Harper”, and I’ll stand by that. (7)

JIMBO MATHUS – Incinerator
Introspective and more country than rock this time around, Mathus stays true to his Southern roots with another excellent set of songs. (8)

NORAH JONES – Begin Again
Refusing to be pigeonholed simply to cash in, Jones adds electronica and country flourishes to her jazz-pop, and from a purely artistic point of view it mostly works. (7)

LAST POETS – Understand What Dub Is
Dub version of last year’s “Understand What Black Is” album, which was reggae-based anyway so this works just fine. Light up a spliff and enjoy the poetry. (7)

PJ HARVEY – All About Eve
Original score for a new stage adaptation of a classic play. Lead actresses Lily James and Gillian Anderson both contribute vocals. It doesn’t sound like a PJ Harvey album and it’s hard to judge its effectiveness as a soundtrack without having seen the play, but of course Polly Jean fans will have to hear it, it’s a matter of principle. (-)

SHOVELS & ROPE – By Blood
Husband and wife team on homebrewed folk rock ditties. And no, their actual names are not Peter Shovels and Jennifer Rope or something along those lines, and this is probably the right time to admit that, for decades, I was under the impression that Barclay James Harvest was a trio of dudes called Barclay, James and Harvest. (7)

THIRD EAR BAND – Elements 1970-71 (expanded edition)
Obscure underground prog/freak-folk “classic” rediscovered, remastered and expanded to 3 CDs. Proves it had deservedly fallen into obscurity because it’s utter shite and for the most part sounds like a classical orchestra comprised of stoned amateur hippies (which I’m sure is what they were) unsuccessfully trying to tune their instruments before rehearsing together for the first time. (1)

WEYES BLOOD – Titanic Rising
Natalie Mering has just created some classic 70’s-style AM radio pop that brings to mind what the Carpenters and various assorted solo Beatles used to do, or what Father John Misty is currently doing. (8)

VARIOUS ARTISTS – Late Night Tales: Floating Points
I love LNT, a chill-out compilation series built around the idea of making the perfect late night mix and the latest instalment, curated by electronica musician Sam Shepherd (AKA Floating Points), doesn’t disappoint – I’ve previously heard only one of the jazz, soul and ambient artists featured here but these beautiful rarities blend seamlessly into each other. (8)