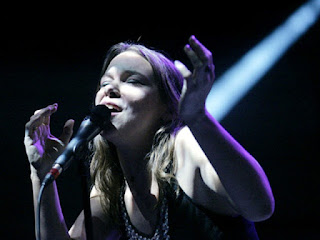 I had a brilliant idea the other night and I woke up around 4:00am with a fully formulated 1,800-word thinkpiece for this blog in my mind. It was smart, it was funny, it was definitely one of the best essays I had ever come up with for the original concept of "I Was A Teenage Music Geek"! I grabbed a pen and a piece of paper, jolted down a couple of keywords so I wouldn't forget to write the thing when I got up, and went back to sleep.

The next morning I found a piece of paper with the words "almost perfect" scribbled on it and no fucking clue what it meant and what I was supposed to write about. Almost perfect my ass. Oh well.

So anyway. Regardless of what the original drunken and already long forgotten idea was all about I will seize this opportunity to go on record stating that I like imperfect things, especially imperfect music. It's much better than perfect music, it's more human. Like, for example, this performance of "Anywhere On This Road" by the late Lhasa De Sela. This live version is empty without the excellent middle eastern-ish instrumentation of the studio recording (from her 2003 album "The Living Road"), Lhasa's voice cracks here and there, and the percussionist loses it towards the end.

But these flaws are exactly what make this performance so beautiful: Art is all about capturing the essence, the spirit of the subject, whereas "perfection" is all about the pursuit of a sterile, polished external appearance. That's why punk killed prog rock, that's why Picasso's "Guernica" touches you in ways Bob Ross cannot, that's why the imperfect songs of this fragile, strange, funny girl called Lhasa who dropped out of school to literally join the circus and died far too young touch me so deeply. Fuck perfection. 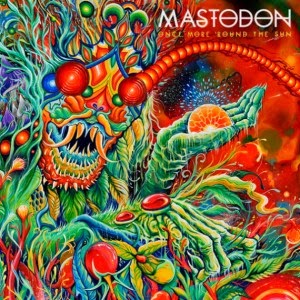 BOB MOULD – Beauty And Ruin
This is the most Mouldy-sounding Bob Mould record in ages. It’s got all the Husker Du rage and the Sugar melody and lots of big guitars and it’s a must-have. (8)

BODY COUNT – Manslaughter
OMG this is hilarious, Ice-T at his most cartoonishly violent backed by a hardcore/thrash band that’s tighter than a duck’s ass. I love it! (8)

GODFLESH – Decline And Fall
You’re gonna love this EP if you never had a problem with Godflesh’s fucking annoying drum machine sound. This as as apocalyptic as any of the old stuff. (7)

LINKIN PARK – The Hunting Party
I hate all their albums except “A Thousand Suns” which I love and their hardcore fans hate, so I guess their fans are going to hate “The Hunting Party” because I think it’s great. Guest slots by Rakim, Page Hamilton, Tom Morello and Daron Malakian for extra street cred. (8)

MASTODON – Once More 'Round The Sun
Only played this once so far and my mind has already been duly blown. Definitely their most melodic album to date, and quite possibly their best. (9)

MAYHEM – Esoteric Warfare
Back in the day we used to call this “intelligent black metal”, but nowadays it’s getting a bit old and Attila Csihar’s Mongolian Vampire shtick is more funny than intelligent. (6)

OCTOBER FILE – The Application Of Loneliness, Ignorance, Misery, Love And Despair
I’m torn between the fact that this is such a blatant Killing Joke rip-off and that it also kinda rules. (6)

RIVAL SONS – Great Western Valkyrie
I’m torn between the fact that this is such a blatant Led Zep/Yardbirds rip-off and that it also kinda rules. (6)

SEPTICFLESH – Titan
“Symphonic death metal” is The Thing That Should Not Be, but Septicflesh somehow manage to pull this shit off magnificently. Impressed. (8)

SERPENTINE PATH – Emanations
This is not slowed-down-power-metal doom. This is low-frequencies-that-make-you-shit-yourself-while-maggots-are-eating-your-eyeballs-out doom. (7)

BLACKBERRY SMOKE – Leave A Scar: Live In North Carolina
Proud sons of Skynyrd and Steve Earle, they own that damn stage and kick your ass six ways to Sunday. Awesome facial hair too. (8)

BRUCE ROBISON & KELLY WILLIS – Our Year
I like my country boys bad and my country girls gritty and this couple is a bit too vanilla for my taste. First-class songwriting though. (7)

DAVE ALVIN & PHIL ALVIN – Common Ground
The Blasters brothers reunited and playing Big Bill Broonzy covers. If you like the blues and juke joint jumpers you’re going to have a blast with this one. (7)

DJANGO DJANGO – Late Night Tales
This compilation sounds like a really cool cocktail party where everyone is smartly dressed and gorgeous and making hip small talk on the veranda, but makes me feel like I’m the weirdo misfit guest in shorts drinking alone. (6)

JACK WHITE – Lazaretto
Dude really knows his blues and his rock and this time he takes an “everything but the kitchen sink” approach with fiddles, rapping and gothic choirs. More fun that the Black Keys album! (8)

MIRANDA LAMBERT – Platinum
Like a (more) redneck version of Taylor Swift, she’ll bake you an apple pie one day and aim her shotgun at you the next. (7)

Posted by TeenMusicGeek at 19:18 No comments:

The Trail of Rage and Melody Bob Mould on being in a young unknown punk band touring seedy venues: “One woman who was a regular at the Calgarian was stabbed on Monday night, and then stabbed again that Wednesday. It was that kind of place.”

Bob Mould on what many people consider Husker Du’s finest moment: “I hesitate to say this, but here goes: Zen Arcade means a whole lot more to others than it does to me. I began to outgrow and move beyond those feelings almost at the moment I documented them, but the fact that they resonate so deeply with my audience, the critics, and generations of fellow musicians – there is the reward.”

Bob Mould on the difficulties of coming to terms with his homosexuality: “As more of an aggressive masculine figure, I had very little time for the effeminate gay stereotype. For better or worse, that was my ignorant and sheltered rural upbringing. I had no role models and no exposure to gay culture. So when I was confronted with certain variants of gay life, it made me hate the fact that I was gay – not the act of gay sex, but the image that the media would hype up, or the one I kept in my head, of what a gay man was: queer, effeminate, camp. That was so far removed from how I perceived myself. But I was terribly ignorant of the diversity in the gay community. All I had was me and the media stereotype of what gay was, and the two were so far apart, I felt no connection.”

Bob Mould on what yours truly considers the greatest break-up album ever recorded, Black Sheets of Rain: “The label became concerned about how to market such a dark album. This thing was beyond the “wall of sound” – listening to it felt like being trapped in a large factory that was quickly filling up with motor oil. What can I say? I wrote the songs in a troubled time and the record reflected that.”

Bob Mould on the music industry: “I realized that my business had gotten away from me. It wasn’t that I was being taken advantage of, but I had lost control of the finances and logistics. I wasn’t writing the checks, I wasn’t monitoring what was happening... Everybody I was employing was making more money than I was.”

Bob Mould on forming Sugar instead of releasing solo album #3: “I also realized that the average indie rock fan in 1992 didn’t want some guy’s name on the T-shirt – they wanted a shirt emblazoned with a band name. These days many solo projects have a band name because it sells more T-shirts.”

Bob Mould on Kurt Cobain: “It almost seems like the more you show of yourself, the more people want. People gravitate to the artist, wanting to see deeper pain, higher joy, brighter light. And once you become successful, the business won’t let you catch your breath.”

Bob Mould on which period of his career was more fun: “Husker Du was an eight-year ground war that started with me and some guy burning Thai stick in the basement of a record store, and ended with that guy’s mom suggesting we should only play on weekends. Sugar, in twelve months, went from three men building a stage extension out of road cases for a punk show in Monrgantown, West Virginia, to playing gigantic European festivals with Metallica. Which part of my life do you think I enjoyed more?”


Bob Mould on something we’ve lost: “I went to the record stores and I watched other people browsing through records. Nothing is more telling than when someone pulls that one-square-foot piece of cardboard out of a bin filled with similar pieces of cardboard. You’re definitely going to look at what he’s chosen. You see him pull out the Pat Benatar record, so you blow right by that person. But if he pulls 20 Jazz Funk Greats by Throbbing Gristle, you perk up and take interest in what he might pull next. We’d do this dance around the record store with each other, and that was one way to find like-minded people. We don’t do that dance now.”


…And I’m not even quoting the juicy bits about Mould’s love/hate relationship with his father, Husker Du’s development and break-up, his boyfriends, his alcoholism, the tension between him and Grant Hart, and having Pete fucking Townshend tell him that he, Pete, is a big fan of his. See a Little Light: The Trail of Rage and Melody, Bob Mould’s autobiography, is a great rock ‘n’ roll book and not just for Mould fans. It simply is a fantastic memoir.

You know what the best thing is? I started reading the book on the same week that Mould’s excellent new album, Beauty and Ruin, came out, so I had the perfect soundtrack for it. Go buy both now.

Posted by TeenMusicGeek at 13:48 No comments: