BEYONCE & JAY-Z (THE CARTERS) – Everything Is Love
The surprise album drop thing is getting a bit tired and so is their idea of turning their marriage into a reality show and mending it publicly through their albums: Beyonce’s “Lemonade” accusation was great, Jay-Z’s “4:44” apology was OK, but third time around I’ve got very few fucks left to give about this “we’re fine now” joint effort. (6)

FANTASTIC NEGRITO – Please Don’t Be Dead
From the Led Zep-infused “Plastic Hamburgers” to the “Come Together”-isms of “Bad Guy Necessity”, from “A Boy Named Andrew”’s exotic hook to the chilling “A Cold November Street” and the funky “Bullshit Anthem”, this guy’s singlehandedly dragging the blues kicking and screaming into the 21st century. (8)

KAMASI WASHINGTON – Heaven & Earth
I don’t know much about jazz but I know what sounds good, and this sounds GREAT. More than a jazz saxophonist, Washington is a genius arranger/bandleader who’s not afraid to venture into Stevie Wonder/Isaac Hayes soul/pop territory as he’s more about solid songwriting rather than just technical dexterity. (8)

ORANGE GOBLIN – The Wolf Bites Back
Not sure why they’re still stuck with the “stoner” label (which they seem to be perfectly happy with, BTW) since, really, these are the children of Motorhead. (7)

WILKO JOHNSON – Blow Your Mind
Wilko didn’t die, he’s back to kick some ass and he sounds VERY alive. His guitar playing remains awesome, his band is rockin’, too bad he can’t really sing so minus one point. (7)
Posted by TeenMusicGeek at 13:35 No comments: Links to this post 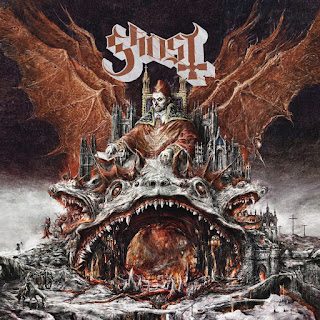 GHOST – Prequelle
It’s so refreshing to find a metal musician with a brain inside his head that I want to give him a 10 just for that, let alone the tunes being catchier than the Black Plague he sings about. (9)

GRAVEYARD – Peace
If this album is any indication there was no reason for the band’s break-up, they just seem to have picked it up from where they had left it, only the drummer’s different. Apart from that, it’s the same competent retro pseudo-70’s boogie/garage rock. (7)

PANEGYRIST – Hierurgy
Devoutly Christian black metal (!?) with epic undertones sounds surprisingly better than expected, sort of like a cross between Arcturus and Bathory. (7)

ZEAL & ARDOR – Stranger Fruit
When the debut came out in 2016 we expressed the opinion that if he skipped the DIY and got a real drummer he’d be capable of greatness. So he went out and hired Kurt Ballou and a real drummer and he came up with greatness, not straying from his unique satanic black metal/gospel mash-up style but more, well, satanic. (8)

FATHER JOHN MISTY – God’s Favorite Customer
Officially released more than a month after being leaked, this still sounds pretty great a month later and it's a lot poppier than his previous one. Play it for the songs, not for the hype. (8)

NEKO CASE – Hell-On
Case is very different from every other female singer-songwriter out there and cannot be compared to anyone else. It’s not “Americana”, it’s not rock, it’s not country or folk, I really don’t know how to label this but I know these songs go deep and demand multiple listens. Mark Lanegan, k.d. lang and a whole bunch of others guest. (7)

THE LAST POETS – Understand What Black Is
Forefathers of rap return 50 years after the group’s inception and 21 years since their last studio album, and they’ve got plenty to say on this spoken word/reggae/jazz hybrid. (7)

VARIOUS ARTISTS – Late Night Tales: Agnes Obel
I love this artist-curated compilation series, and Obel’s “mixtape” is among the most eclectic of the bunch with tracks by Henry Mancini, Lee Hazlewood, Yello, Lena Platonos, Ray Davies, Can etc. blending seamlessly into a beautiful collection of music. (8)
Posted by TeenMusicGeek at 18:02 No comments: Links to this post