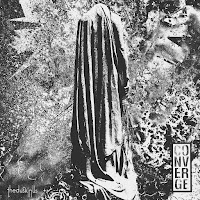 AOSOTH – V: The Inside Scriptures
Unholy, dissonant French black/death metal from Antaeus frontman MkM, fifth release and no signs of slowing down their demonic assault. (8)

CONVERGE – The Dusk In Us
Brutal and raw, “The Dusk In Us” is yet another excellent addition to the Converge canon. As I already stated a couple of months ago, all the best metal albums this year were created by punk bands. (9)

GRETA VAN FLEET – From the Fires
Hey you guys, Robert Plant just called from 1973 and he’s mad as hell, he says he’s coming over to kick your asses. (6)

GREEN DAY – Greatest Hits: God's Favorite Band
Fairly comprehensive best-of collection (nothing from the 1990 debut but there were no hits on that one anyway) and featuring two new songs (one a duet with country superstar Miranda Lambert). Look, I like pop-punk, OK? And I like these guys, I think they’re a great arena-rock band and there are some REALLY GOOD tunes in here. (9)

MICKEY HART – RAMU
I was never a Deadhead but I like Hart’s solo albums – the Grateful Dead drummer is very creative when putting together teams of A-list percussionists from around the globe and exploring world music. “RAMU” is not as groundbreaking as “Planet Drum” but it’s still worth a few spins. (7)

RADIATOR KING – A Hollow Triumph
Influenced by Springsteen, 16 Horsepower, Tom Waits and folk punk (more New Model Army than Gogol Bordello) and featuring an ace band including members of The Hold Steady and the Dresden Dolls, “A Hollow Triumph” is a minor triumph. (8)

SCOUR – Red
For those of you still paying attention to what Phil Anselmo’s doing, this is his black metal supergroup featuring members of Pig Destroyer, Cattle Decapitation and possibly other livestock-abusing bands. (7)

SHARON JONES & THE DAP KINGS – Soul Of A Woman
Posthumous release from excellent, hard-working, world-class soul/funk revivalist performer will make you happy and sad at the same time. (8)