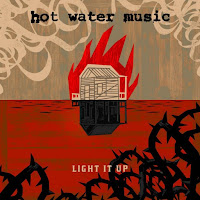 BALL – Ball
Superfuzzed heavy psych-rock from a bunch of Swedes who won’t reveal their identities, so it’s either someone we know or someone trying to pull a Ghost. In any case, this rocks. Hard. (8)

HOT WATER MUSIC – Light It Up
Melodic, anthemic punk rock with choruses that beg to be screamed out loud while hugging your best mate. I’m 49 and this stuff still moves me to tears. (8)

MARILYN MANSON – Heaven Upside Down
“The Pale Emperor” was great and very different from anything MM had ever done before. This year’s follow-up is more like a throwback to the “Antichrist Superstar”/“Mechanical Animals” sound of 20 years ago. (7)

MASTODON – Cold Dark Place EP
4 unreleased tracks, 3 from the “Once More ‘Round The Sun” sessions and 1 from the “Emperor Of Sand” sessions, more laid back but totally awesome in their epic epicness. Seriously, this stuff is better than both albums, or perhaps easier to digest since the EP’s only 22 minutes long. (9)

THE BRONX – V
They call themselves “The Greatest Punk Rock Band In The World”. They’re not, but they certainly play like they believe it. (8)

WOLVES IN THE THRONE ROOM – Thrice Woven
A very welcome return to their black metal roots after the unfortunate ambient/faux-Tangerine Dream experiment of “Celestite”, this is one of the best metal albums you’ll hear this year. Great guests (Anna Von Hausswolff, Neurosis’ Steve Von Till) add an extra dimension. (8)

AMADOU & MARIAM – La Confusion
New album from Malian husband & wife Afro-blues duo. Too many keyboards and electronics on this one, losing some of the immediacy that had made 2005’s Manu Chao-produced “Dimanche A Bamako” such a great album. (7)

ANTIBALAS - Where The Gods Are In Peace
Brooklyn-based Afrobeat 12-piece collective that has supplied the likes of Arcade Fire, The Roots, Mark Ronson and The Black Keys with session players returns with funky new album. Sounds very African and very New York at the same time. (7)

BEDOUINE – Bedouine
Promising debut album from young Syrian singer-songwriter living and working in L.A., featuring an impressive list of collaborators who have previously worked with Beck, Norah Jones and Devendra Banhart. Fans of Natalie Prass should check her out. (7)

DAN REED – Confessions
Not having heard a single note from Reed since 1991 I was still sort of hoping I’d get some funky hard rock when I decided to give this a spin, but instead I got 10 sugary ballads which is 9 sugary ballads more than I can take in one sitting. (5)

TEXAS GENTLEMEN – TX Jelly
Ace Texan backing band steps out on its own after playing with everyone in country and rock from Kris Kristofferson to Leon Bridges to Nikki Lane. (7)

TOM RUSSELL – Folk Hotel
It’s hard for the father of Americana to top 2015’s “The Rose Of Roscrae”, his masterpiece, but Russell takes a shot at it and comes pretty damn close. (8)