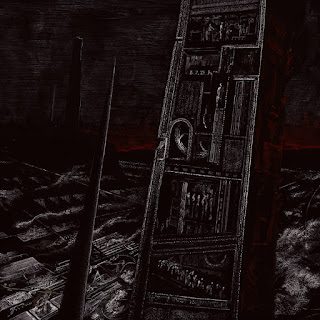 CAVE IN – Final Transmission
Featuring bassist Caleb Scofield’s final recordings before his tragic death in 2018 this is a fitting epilogue to a great, great band. A big chunk of the album’s proceeds will go to Scofield’s young family so don’t be a dick, buy this. (8)

DEATHSPELL OMEGA – The Furnaces of Palingenesia
Chaotic, dissonant black metal might not be everyone’s cup of tea but Deathspell Omega excel at it. (8)

HOT WATER MUSIC – A Flight And A Crash/Caution (Remastered)
The band’s fourth and fifth albums from the early 00’s remastered and reissued on vinyl. If you missed out on one of the best punk bands of the last 20 years the first time around, not unlikely as they were sometimes found under the unattractive and inaccurate “emo” label, now’s the time to repent and do something about it. (8)/(9)

HOT WATER MUSIC – Shake Up The Shadows
5-song EP does not deviate from the HWM canon of melodic, passionate punk rock. It’s out on Epitaph, their 2001-2004 label, if this signifies something to the fans. (8)

LAST POETS – Transcending Toxic Times
Spoken word/proto-hip hop pioneers return less than a year after their last album following a long hiatus. Whereas 2018’s “Understand What Black Is” was reggae-flavored, this one’s funkier. Some of the poems have appeared on previous albums with a different instrumentation. (7)

LONE JUSTICE – Live At The Palomino 1983
Unearthed and previously unreleased live performance. Don’t expect hi-fidelity on a two-track recording, to paraphrase Tom Waits this is music with the rinds and the seeds and the pulp left in, but after starting the set with a deceptively mellow ballad the band explodes into a frenzy of manic cow-punk that’ll leave you breathless, led by a frontwoman who’s nothing short of a force of nature. (8)

MAVIS STAPLES – We Get By
Legendary gospel/blues/soul singer turns 80 and still releases excellent albums, this time with some help from Ben Harper. (8)

RAMMSTEIN – Rammstein
When they bring on the Metal they sound pretty epic, on the more dancefloor-friendly tracks like “Auslander” they sound a bit Eurovision-y, but in a good way. The videos are pretty awesome. (8)

SAINT VITUS – Saint Vitus
Saint Vitus always sounded dirtier and moldier than their American Doom peers in Pentagram and Trouble, and the new album is VERY dirty and moldy, like it has just been dug up after twelve years in the tomb. And, having started out playing with Black Flag in the early 80’s, they come full circle and close the album with a real hardcore punk song. (7)

SHOW ME THE BODY – Dog Whistle
Third album by NYC band specializing in angular noise rock. I’ve read comparisons to Fugazi, At The Drive In and Death Grips, but to me they sound totally 1990 Jesus Lizard/Amphetamine Reptile. Check it out if you’re into that stuff. (8)

VARIOUS ARTISTS – Jobcentre Rejects: Ultra Rare NWOBHM 1978-1982
Great compilation of rare recordings by obscure bands such as Baseline, Predatur, Frenzy, Die Laughing, Static, Metal Mirror etc., the only relatively known but long forgotten one being Spider. There’s nothing game-changing here like Iron Maiden or Diamond Head, just lots of good-time beer-soaked songs that in some cases are more Status Quo boogie rather than pure heavy metal, but in any case probably deserved better than a privately issued small-run 45 release. (8)