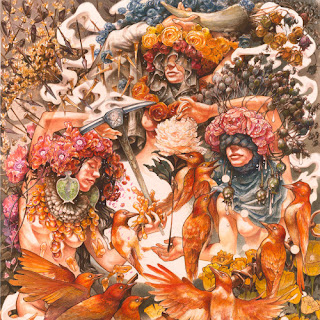 BARONESS – Gold & Grey
Their magnum opus and one of the best metal albums you’ll hear this year. (9)

BILL CALLAHAN – Shepherd in a Sheepskin Vest
Ex-Smog mainman and legendary indie rock Casanova (he has dated Joanna Newsom, Cat Power and a bunch of other high-profile female musicians) on low-key, quiet songs about settling down, sung in his trademark baritone voice. It’s OK, not great, but will get 9/10 and above from nerdy music critics with no romantic life of their own. (7)

CALEXICO & IRON AND WINE – Years To Burn
14 years since they released an EP together, Americana heroes collaborate again for a new album. Fans of both acts will enjoy. (8)

EAGLES OF DEATH METAL – EODM Presents Boots Electric: Performing The Best Songs We Never Wrote
A bunch of cover versions even sillier than the band’s name. (6)

ELENI MANDELL – Wake Up Again
Having Chuck E. Weiss as a mentor must have been a VERY interesting way to enter the music business but Eleni has always had her own voice, and after 11 albums it has evolved into a strange but interesting hybrid of folk, pop, jazz and slowcore. (7)

JAKE XERXES FUSSELL – Out Of Sight
American folklorist unearths and modernizes a bunch of traditional tunes on his third album. (7)

JAMBINAI – Onda
This South Korean band plays the exact opposite of K-pop – a thrilling, epic mix of post-rock and metal with traditional Korean instruments that ends up halfway between Godspeed You! Black Emperor and, well, Emperor. (8)

THE LORD WEIRD SLOUGH FEG – New Organon
Celtic-tinged traditional metal without being Thin Lizzy karaoke. Better than the Bible Of The Devil album by the way, just saying since the two bands are linked in more ways than one. (8)