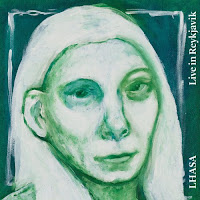 EMINEM – Revival
This is getting mixed reviews but he’s slamming Trump and sampling “Earache My Eye” so I like it. (7)

ESPERANZA SPALDING – Exposure/Undeveloped
Spalding, one of jazz’s greatest and most media-savvy contemporaries, entered the studio with no songs but with the mission to write, produce and record a whole album in 77 hours, livestreaming the whole process to the world. “Exposure” is the end result and it obviously sounds a bit raw compared to 2016’s “Emily’s D+Evolution” but it’s beautiful nevertheless. It comes with “Undeveloped”, 38 minutes of Spalding practicing pre-“Exposure”. (8)

LHASA DE SELA – Lhasa Live In Reykjavik
Lhasa died too young but managed to record this in time after being diagnosed with cancer. It is the saddest, most beautiful music I’ve heard in a long time, featuring her unique folky world music and material from all three of her studio albums. (9)

LINDI ORTEGA – Til The Goin’ Gets Gone EP
❤ (includes a chilling cover of Townes Van Zandt’s “Waiting ‘Round To Die”). (8)

LORDE – Melodrama
Lots of people write pop songs about heartbreak and being a teenager in love but Lorde does it better than most, and now that everyone hates Taylor Swift I think she’ll be the Next Big Thing. (8)

RAINER MARIA – Rainer Maria
Reformed emo band returns with new album more than a decade after their last sidelining the emo in favor of a harder approach, sometimes sounding like Hole trying to emulate Led Zeppelin. (7)

TRAVIS MEADOWS – First Cigarette
If you’re from Nashville, lost your right leg at 14, became an alcoholic, went into rehab, and had your girlfriend diagnosed with breast cancer AND your three-legged dog Larry go missing within weeks of each other, then you have no other option in life but to be a country singer, but 50-something songwriter’s songwriter Meadows also evokes the American heartland here, from Springsteen to Bob Seger. (8)
Posted by TeenMusicGeek at 19:00