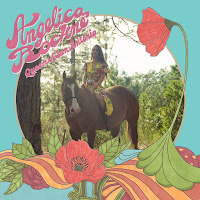 ANGELICA ROCKNE – Queen Of San Antonio
If she keeps on releasing albums as strong as her debut, psychedelic-country singer/songwriter Rockne will be a serious contender for the throne she claims. (8)

BJORK – Utopia
What the fuck is this? No seriously, what is this? Is it “pop” if you can’t hum a single melody? This sounds like it belongs in a fucking art gallery. You can appreciate stuff you see in art galleries but you can’t have any fun with them, can you? (5)

CHRIS STAPLETON – From A Room: Volume 2
Just as good as Volume 1 from Chris, the guy with the best voice in the Universe and one of country music’s contemporary Holy Trinity along with Jason and Sturgill (none of which is really country but that’s another discussion). (8)

FRANK TURNER – Songbook
Not all his albums have the consistent quality of “Tape Deck Heart”, his 2013 tour de force, but punk-gone-folkie Turner is a master of The Perfect Single and the modern King of Sing-Alongs so this collection (one “greatest hits” disc including a new track plus a bonus disc of re-worked, re-recorded older songs) is both a perfect introduction for the newbie and a very welcome package for the fanbase. (8)

GHOST – Ceremony And Devotion
I’m not a big fan of live albums, but coming from a gimmicky band like Ghost this does serve as testimony to the impressive strength of the actual music. (8)

JUSTIN TOWNES EARLE – Kids In The Street
Missed out on this one when it came out earlier in the year but saw it on a couple of end-year lists so decided to check it out and just like his more famous father, Steve Earle’s kid doesn’t disappoint: A competent mix of roots rock and country, definitely more polished than dad’s but just as entertaining. (7)

LILLY HIATT – Trinity Lane
Another one with a famous father (John Hiatt) I missed out on earlier this year. Hiatt is one angry, heartbroken lady who knows how to turn her feelings into great country rock songs, or at least that’s the persona she assumes here. Love this! (8)

MORBID ANGEL – Kingdoms Disdained
After the piece of shit that was “Illum Divinum Insanus” our expectations from a new Morbid Angel album were extremely low, but Azagthoth & Co. manage to pull a return to form of sorts with one of the most brutal and technical death metal albums of the year. (7)

WARRIOR SOUL – Back On The Lash
As much as I love the guy this is just a bunch of riffs randomly thrown together with cliché lyrics on top and a piss-poor production job. (5)