Aw mom, you're just jealous, it's the Beastie Boys Book 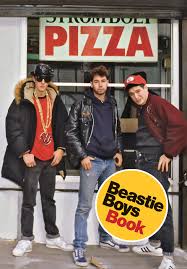 There's thousands of band/artist autobiographies out there and sometimes it feels like I've read them all, but this book is truly one of kind. Close to 600 pages long, it's not just the fascinating story of a truly unique band - it's also the story of New York City at the end of punk and the beginning of hip hop, a story of growing up in public, a story about artistic integrity and navigating the trappings of fame and, most of all, a story about friendship.

Chock-full of hilarious anecdotes and touching reminiscences, mostly written by Adam Horowitz and Michael Diamond but with the ghost of Adam Yauch floating over every page, it also features many guest contributors associated with the band in various ways: Author Jonathan Lethem, the band's original and ousted drummer Kate Schellenbach (later of Luscious Jackson), directors Spike Jonze and Wes Anderson, comedian Amy Poehler and others offer their own take on aspects of the Beastie Boys' career. There are many laugh-out-loud moments here, my favorite one probably being a prank Yauch played on Horowitz that started in 1992 with the punchline delivered 15 years later. Oh, and their 2007 gig in Athens gets its own chapter, thanks to the assholes who ruined that year's Ejekt Festival and set fire to the band's dressing room.

If you're a fan, this book is everything you've ever wanted. If your relationship with the Beasties is limited to the basics, you'll still enjoy it immensely. Right now, it's my favorite book ever.