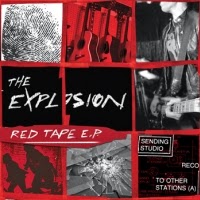 ADMIRAL SIR CLOUDESLEY SHOVELL – Check ‘Em Before You Wreck ‘Em
Uglier in a catsuit than the rest of Rise Above’s roster, not metal but definitely heavy, downright nasty sounding. Fun! (8)

BRODY DALLE – Diploid Love
A welcome return for our favorite punk rock mom, but the occasional drum machine and mariachi brass take some of the bite off. “Don’t Mess With Me” sounds just like her hubby jamming with NIN. (7)

BRUCE SPRINGSTEEN – American Beauty EP
He’s The Boss. Even when not in top form he gets an easy seven. (7)

CARLENE CARTER – Carter Girl
Just like Rosanne Cash, Carlene made a fantastic country album in 2014 so there’s definitely something to be said for growing up in the Johnny Cash/June Carter household. BE WARNED: On a couple of tracks she sounds exactly like Nashville’s answer to Vicky Leandros. (8)

CHUCK E. WEISS – Red Beans & Weiss
You’ve got to like Chuck E. I mean, how can you not like him, he’s like Tom Waits’ wisecracking surrealist older brother. If he was a movie he’d be “The Big Lebowski” as done by the Marx Brothers. (7)

CIRCLE – Leviatan
Listening to this makes me want to smash an acoustic guitar on someone’s head and then shove a dozen drum brushes up his ass while screaming obscenities at him in a strange Scandinavian language. (5)

FU MANCHU – Gigantoid
Last time I played anything like this I was in a 90’s dorm room rolling a blunt, I accidentally spilled the dimebag contents and then spent the next two years on my knees trying to pick the damn stuff out of the carpet. (7)

GARBAGE & BRODY DALLE – Girls Talk
Not only is Shirley Manson beginning to look worryingly like Marilyn Manson, but the A side of this 7-inch is dark and hard and grungy and almost industrial and kicks some serious ass too. (8)

JACK BRUCE – Silver Rails
Claims he was influenced by Earth on this album, his voice suggests he just crawled out of it. He can still come up with a decent blues tune though. (6)

PLANET OF ZEUS – Vigilante
Last time I played anything like this I was in a 90’s dorm room rolling a blunt… Oh wait, you’ve heard this one before? (7)

SWANS – To Be Kind
Definitely not for people with Attention Deficit Disorder. Give me a couple of months to digest and I’ll get back to you. (∞)

THE EXPLOSION – Red Tape EP
What else is there to say, this 3-song EP is 8 minutes of punk rock perfection. (10)

WOVENHAND – Refractory Obdurate
Maybe he’s a fun guy, I don’t know. But he still sounds like he hasn’t had a laugh in the last thousand years. (7)