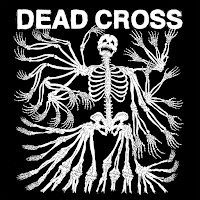 THE AMERICANS – I’ll Be Yours
Spiritual children of Creedence Clearwater Revival, the original roots rock/americana band. (7)

DALE CROVER – The Fickle Finger Of Fate
Melvins drummer on solo album has some fun experimenting and fooling around in the studio. Non-essential. (6)

DREAM MACHINE – The Illusion
Great occult/psych-rock revivalist album, organ-driven, sounds like an Iron Butterfly/Atomic Rooster/Doors/Electric Prunes hybrid. But they make a big fuss about tuning to A=432hz instead of A=440hz so they should cut the pretentious crap. (8)

ECHO & THE BUNNYMEN – The Killing Moon: The Singles 1980-1990
Hated them since I was a teen.  Decided to give them another chance now that I’m older, wiser and with a wider music taste palette. Still hate them. (-)

GEORGE THOROGOOD – Party Of One
Solo, mostly acoustic blues record. I prefer him when he’s rockin’ backed by the Destroyers. (7)

HACRIDE – Chapter I: Inconsolabilis
Solid EP by underrated French band, Gojira contemporaries who have also moved way beyond their death metal/Meshuggah roots. Fun fact: Half the band are touring members of Carpenter Brut. (8)

HARD WORKING AMERICANS – We’re All In This Together
Not to be confused with The Americans (see above) but, yeah, spiritual children of Creedence Clearwater Revival, the original jam band. This is a live album, if you liked last year’s “Rest In Chaos” then you should definitely check this out. (7)

LANA DEL REY – Lust For Life
Now that everyone has realized Lana Del Rey is just a persona/character like Alice Cooper, can we all agree that Lizzy Grant writes pretty decent pop songs and releases great singles? Too bad about the album filler though – like her previous works, “Lust For Life” would greatly benefit from being 3-4 songs shorter. (7)

MELVINS – A Walk With Love & Death
If you’re not already a Melvins fan then don’t bother with this one. If you are a fan then you know the only real surprise on a Melvins album is who’s playing bass, and this time it’s Steven McDonald from Redd Kross. This is a 2-disc set, album 1 (“Death”) sounds like a Melvins album, album 2 (“Love”) is the soundtrack to an experimental film directed by Jesse Nieminen and it sounds like the soundtrack to an experimental film (i.e. pretty much unlistenable). (7 Death/4 Love)

NINE INCH NAILS – Add Violence
This EP features Reznor’s most “commercial”/accessible material in ages, except when it features his noisiest. (8)

RANDY NEWMAN – Dark Matter
If you only know Newman’s music from the Pixar movies he scores then you’re missing out on a great, weird songwriter and a master of irony and satire who can also pull your heartstrings: Before you’ve stopped LOLing over a song like “Putin”, here comes another one like “Wondering Boy” to make you cry. (8)

SHABAZZ PALACES – Quazarz: Born On A Gangster Star / Quazarz Vs. The Jealous Machines
Is this art-rap? Is it prog-hop? Dunno how to label them, but they definitely sound like no one else on their two new albums released simultaneously. (7)

SHEER MAG – Need To Feel Your Love
Thin Lizzy-influenced classic hard rock with lo-fi production and hi-fi ambitions. What I don’t get is why everyone talks about Tina Halladay’s voice, this reviewer finds her delivery rather grating. (6)

TOM JONES – Live On Soundstage
CD/DVD package from a recent show in Chicago, featuring special guest Alison Krauss. A mix of tracks from his 3 excellent most recent albums and re-imagined older classic hits, with the psychedelic latin-rock version of “Delilah” an obvious highlight. (9)

TYLER CHILDERS – Purgatory
Sturgill Simpson protégé but more traditional-sounding, this is pure old-school country music with the exception of “Universal Sound”, the closest Childers gets to Simpson’s cosmic meditations and coincidentally (?) the album’s best track. (7)

VARIOUS ARTISTS – Late Night Tales: BADBADNOTGOOD
In case you’re not familiar with the concept – “Late Night Tales” is a series of artist-curated compilations, with curators being asked to put together the ultimate late night mix. BADBADNOTGOOD do a decent job but this is not as great as the Cinematic Orchestra and Nils Frahm ones. (7)

VARIOUS ARTISTS – Soul of a Nation: Afro-Centric Visions in the Age of Black Power (Underground Jazz, Street Funk & the Roots of Rap 1968-79)
Of course this compilation opens with Gil Scott-Heron’s “The Revolution Will Not Be Televised” and includes mind-blowing tracks by Roy Ayers Ubiquity, Oneness Of Juju etc., but it’s certainly incomplete without The Last Poets. Great stuff anyway. (8)
Posted by TeenMusicGeek at 19:51