The Humorless Ladies Of Border Control 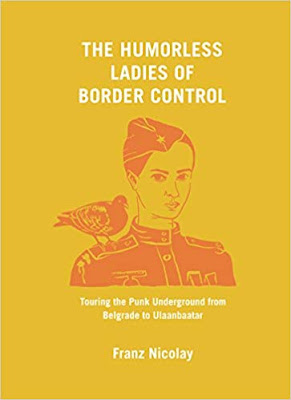 Franz Nicolay, best known as the Hold Steady's mustachioed keyboard player, quit his band in 2009 and spent the next five years on a seemingly neverending DIY tour across what used to be known as the Eastern bloc playing solo shows in anarcho-leftist squats and damp basements with just a guitar, a banjo, an accordion and, occasionally, his wife. This is the book about those five years.

I became a professional traveler. It said “musician” on my tax returns, but if you drew a bar graph illustrating how I spent my years, “music” would be a matchbox, and “travel” and “waiting” twin towers. I stopped having real friends. My old friends still saw one another, met for drinks, fell in and out of love — they just did it without me. And my new friends were either friends of necessity — we were trapped in the same rolling boxes — or of transience, necessarily shallow relationships since I wouldn’t see them until their own orbit blipped through mine again.


"The Humorless Ladies Of Border Control" (rather catchily subtitled "Touring The Punk Rock Underground From Belgrade To Ulaanbaatar") is not strictly a book about DYI punk rock touring, however: Yes, it is that, and I suppose those are the parts of the book of most interest to the readers of this particular blog, but it's also a snapshot of the past and a window into the future of punk rock in the former communist countries, and it's also a wonderful and accurate travelogue and description of what life is like in Ukraine, Bulgaria, even Mongolia from a countercultural perspective. Nicolai certainly knows his Eastern European history and politics, is a keen observer of human behavior, traits and flaws, ventures off the beaten track and keeps a detailed diary in a writing style that's equal measures informative and entertaining.

There is a great deal of similarity between touring life and military life: small groups of men (and it is still, almost always, men) of disparate backgrounds, bonded by close quarters, foreign places, and meager rations, engaged in activities of dubious purpose but governed by vague and powerful ideals—patriotism, punk rock, machismo. The rules are the same: Do your job. Pack light. Defend your gang, don’t get off the boat, beware of strangers. Sleep stacked three-deep in bus bunks like submariners or curled in hard foxhole corners. Release your tensions in promiscuity, alcoholism, and violence. Keep your mouth shut. Keep your feet dry. Above all, don’t complain.


The book features a fantastic supporting cast of ageing hipsters, idealistic concert promoters, weirdo train riders, Mongolian neo-Nazis and Hot Water Music T-shirts, and is certainly an eye-opener if you'd never thought that a punk rock scene exists in Siberia or didn't know/care that an actual war is still going on in the Black Sea region of Crimea. So do yourself a big favor, pick up a copy of this book, and enjoy passages about train travel across Russia such as this one:

We asked the provodnitsa (the iconic uniformed carriage attendant who brings linens and dispenses tea) if anyone else will be in our coupe. “For a thousand rubles,” she said, “I can make sure there isn’t.”

We passed a train labeled НОВОТРАНС, which is pronounced “Novotrans” but which I couldn’t help but read as “Hobo Trains.” Finally, they’ve got their own! Separate but equal.