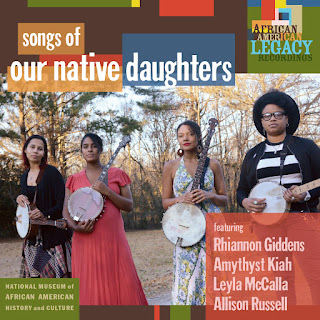 ADIA VICTORIA – Silences
Her 2016 debut was one of that year’s hidden gems, and with an impressive second effort that builds up on her swampy blues/gothic Americana/garage punk hybrid Victoria firmly establishes her position as someone to watch. (8)

BLANK RANGE – In Unison
Somewhere between Americana and power pop you’ll find Nashville’s Blank Range with a solid sophomore effort. “Change Your Look” is such a great song! (7)

DREAM THEATER – Distance Over Time
It’s around 70 minutes shorter than 2016’s double behemoth “The Astonishing”, but feels like it's two days longer. (6)

JESSICA PRATT – Quiet Signs
This time a Jessica Pratt album did not coincide with a Natalie Prass album so we’ll avoid the confusion. Indie folkie Pratt (not Prass) builds a more textured soundscape this time around with a set of beautiful songs that feel like you’re snuggly wrapped inside a soft fluffy blanket on a cold winter evening. (8)

OUR NATIVE DAUGHTERS – Songs Of Our Native Daughters
If the idea of a blues/folk supergroup consisting of four black female banjo players doing an album about racism, slavery and misogyny turns you off, you’ll miss out on the best album released in the first two months of 2019. It might help if we mention that one of the four is Rhiannon Giddens. (9)

ROTTING CHRIST – The Heretics
Some metalheads like 90’s RC, others prefer 00’s RC, and another bunch thinks 10’s RC is the best. This reviewer belongs in the latter category. (8)

RYAN BINGHAM – American Love Song
Californian roots rocker calls out the idiot orange-colored President, but even apolitical listeners will have a blast with the hard blues-gospel-country-rock rhythms and kick-ass guitars driving this album. (7)

SLEAFORD MODS – Eaton Alive
Americans do this political hip-hop/post-punk hybrid thing better, but they probably can’t come up with a line like "Graham Coxon looks like a left-wing Boris Johnson." (7)

THE BANGLES, THE DREAM SYNDICATE, THE RAIN PARADE & THE THREE O’CLOCK – 3 x 4
Each of the four main Paisley Underground bands covers songs by the other three. Fun project, especially hearing the Dream Syndicate’s Steve Wynn sing “The Hero Takes A Fall” which the Bangles, allegedly, wrote about him. (7)

THE CLAYPOOL LENNON DELIRIUM – South of Reality
Primus mainman and John’s more talented son join forces on weird technicolor prog-psychedelic album. Much better than their debut. (8)
Posted by TeenMusicGeek at 11:15