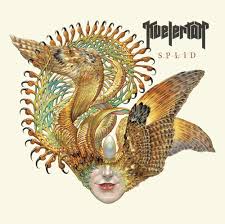 BAMBARA – Stray
Tier-2 post-punk/goth. Peter Murphy in his prime, or a sexagenarian Nick Cave, could eat this guy for breakfast. (6)

GREEN DAY – Father Of All Motherfuckers
This is not the Green Day you know, it’s like a combination of 2017 QOTSA and 2003 Jet and the change of direction sounds forced. (6)

KINETIC DISSENT – Controlled Reaction: The Demo Anthology
You’d think that in this day and age there are no well-kept secrets anymore, but this late-80’s/early 90’s US prog-power-thrash metal band remains well below the radar of most metal fans. Newbies are better off tracking down their sole proper album “I Will Fight No More Forever”, but the handful of fans will cream their pants listening to this one – the band’s four demos, 17 tracks in total, for the first time together on CD. (10 for fans only)

KVELERTAK – Splid
The departure of their original vocalist hasn’t hurt them one bit – the new guy’s just as entertaining and the rest of the band still go for the jugular on an early contender for metal album of the year: Someone announcing “air guitar, come on!” before the lead single’s guitar solo kicks in pretty much sums it up. (9)

MONDO GENERATOR – Fuck It
Former Kyuss/QOTSA/Dwarves bassist Nick Oliveri revives his solo band but the album sounds like a rather uninspired hybrid of all the bands he’s better known for. (6)

ON THORNS I LAY – Threnos
Another strong doom/death metal effort from the Peaceville Three-indebted Greeks. (7)

PSYCHOTIC WALTZ – The God-Shaped Void
A very strong album following a 24-year hiatus from this great prog metal band (more Fates Warning than Dream Theater), but you can’t get it out of my head that “Sisters Of The Dawn” borrows a melody line from Madonna’s “La Isla Bonita”. (8)

RUSS BALLARD – It’s Good To Be Here
Originally released in 2015 as a download-only album, it’s out now on physical formats with additional tracks. Ballard, one of the great songwriters-for-hire of rock’s golden age with hits for Rainbow, Santana, Kiss & Ace Frehley, America, Santana etc. under his belt, proves he’s still got it in his 70’s. (7)

ANTIBALAS – Fu Chronicles
Competent Afrobeat by one of the best western bands doing it. (7)

GREG DULLI – Random Desire
Afghan Whigs frontman releases solo album thick on the atmosphere we love, but a bit light on the hooks. (7)

GRIMES – Miss Anthropocene
Now a famous pop star for reasons that have nothing to do with her music, Grimes releases new electropop/industrial-lite album that’s so drowned in reverb it becomes slightly annoying. Generally speaking it sounds like a cross between Blanck Mass on downers and Taylor Swift on acid, not necessarily a good thing. (6)

HAYSEED DIXIE – Blast From The Grassed
I know it’s a one-trick pony but their bluegrass covers are always fun and this time they focus on pop megahits (Bee Gees, Toto, New Order, Eurythmics…) rather than rock classics. Includes their version of A-ha’s “Take On Me”, the worst song ever written in the history of mankind. (7)

SECRET SISTERS – Saturn Return
Americana sibling duo with a series of fantastic albums based on their vocal harmonies under their belts return with their most pop effort, skipping the Everly Brothers vibe on several tracks where each sister takes her turn on lead vocals. Brandi Carlyle returns to the producer’s chair. Simply beautiful. (8)

SETH LAKEMAN – A Pilgrim’s Tale
A concept album about the puritans’ trip from England to the New World aboard the Mayflower 400 years ago, this is quite possibly the most ambitious and impressive folk album in years. (9)
Posted by TeenMusicGeek at 19:12